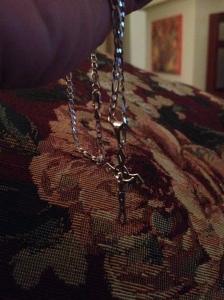 “Your redemption is at the gate of your conscience. You have been granted the power of a choice.” ~ Todd D. Boddy

On Christmas day I was given the gift of a silver crucifix by my mother. This is why….

You may be wondering what this is all about. What will be different? What does the title mean? Well, this is much more than a simple collection of words, more than a simple post about parallels, and it has even less to do with the number twelve.

This is about a moment; a moment of clarity. It’s about a woman’s words, a woman whom I’ve never met, yet her words etched in digitized media rang loud to me early one morning. This is about a sphere that I cannot yet describe; one that I’ve stayed cautiously away from for nearly twenty years, but it is also the same sphere that I’ve looked upon for far too long without action.

This is the sphere of salvation.

Many say that paths have more than one parallel, running straight, uninterrupted; side-by-side. Some believe these paths are but winding roads with bumps and turns and drops, dimly lit on occasion, or vibrantly colored elsewhere.

I believe both paths are true, existing for all to find if the desire to seek beckons the heart.

Sometime paths cross, true. Sometimes paths end, also true. But sometimes, regardless of faith, philosophy or life, paths become one, even if these paths are polar opposites, far removed from the other in every way, shape and form. This is the traveler’s true path, the singular spoke of the grand wheel of life that leads to the center; to the divine presence that pervades all existence.

This is how I learned where my path had been hiding, in plain sight, parallel to my where my feet were currently placed, opposite though completely entwined with all I had thought.

The day made sense to me, and so did the time. At the stroke of the clock, midnight, Thursday became Friday, and the date of 12-12 began. I was laying on the couch at my mother’s, home for the holidays wasting time, eyes becoming heavy. I was scrolling through Facebook looking for something interesting to read. I came upon a post from a woman I’ve never met. Her post was asking for advent music ideas for her playlist. The time was 12:12 am.

As it happens, this woman’s name is Leah Darrow. Former model now turned author, speaker and Catholic advocate for women. I wouldn’t have ever even known who she was had it not been for the fact that her husband, Rick, was a friend of mine during high school. Though Rick and I haven’t seen or spoke since graduation nearly 20 years ago, I finally clicked on her picture and read her profile. Then I became curious, and read her story.

I came upon an article which featured an interview with Leah. In this article she told the story of how, when in New York City she was a contestant on America’s Next Top Model. It further told of how one day during a photo shoot she had a moment of grace; a moment where she realized she wasn’t being authentic to her faith.

“She pictured herself before God after her death and had nothing to show for her life.”

As I read these words, my throat tightened. Tears began to roll down my cheeks and I was astonished. I didn’t know why I felt this way, or even if I was sad. But my heart instantly felt warmth; as if a lost yet all too familiar embrace had found me again. I was now the one having a moment of grace. I sat weeping, feeling as I suspect how Leah did years before.

You see, my family is Roman Catholic, but I hadn’t stepped foot inside a church to pray since age nineteen more than twice. In fact, the first time was during Marine Corps Bootcamp after a fellow recruit was killed in combat training. The last time was to deliver my grandfather’s eulogy after he passed away almost 3 years ago. Twice in twenty years, that’s it.

Since that time, since my late teens, organized religion had dwindled from my interests. Though I’ve remained spiritually aware, and an avid reader and student of all religion and philosophy, the idea of having my thoughts regarding God and faith somehow directed didn’t appeal to me. I thought it controlled more than it helped. I was certain that the answers I could find on my own would be blocked by dogmatic rhetoric, tradition or the so-called “word.”

It was in these moments where I realized I hadn’t been home in almost two decades.

So, what is the sphere of salvation?

It is the realization that no matter where you stand, where you’ve been or what you’ve done, you still have a conscious choice; a choice to look at your feet and notice your path. It is in this moment of realization, this moment of absolute clarity, when we fully know that the divine is with us, and that God is all that exists; that God is never apart from us, and that it is God, the divine source that calls us home, to stand and face our reflection; to become exactly who we are and who we were always meant to be.

With God, we are capable of such love that the sheer mountain of its greatness is indescribable. We are born to know this, and as children we live in this world with full gnosis, yet as we grow, we move from this place of innocence into the void of dreams; into the realm of the world, we grow worldly eyes and develop worldly wants. With worldly eyes and hearts we grow older, yet blind.

In this dream we travel, doing as others do, as we think we should do, intrepidly moving with ambition and drive, but to where? Where do we travel if not for the sake of God and love? What have we done if we cannot stand before God with a life lived for the sake of love; for the sake of others placed first, before our own wishes? What is life if we do not lift up the weak, and inspire the hopeless?

We are never so far removed from this place of peace that we can’t realize, retract and find our hearts again.

This past Christmas morning the first in twenty years that I’ve attended mass, and prayed. And just as it is nice to have a friend visit in my house, so it was just as nice to visit the Lord in his, as if coming home from a journey that took me further than words could describe. Though my beliefs will always transcend what I find within the Catholic faith, it is essential to hold these lessons close; lessons that formed the platform for my understanding of God and salvation. These are the tools that helped carve the path, and set my feet upon this journey of truth.

My journey is far from over, my sphere of salvation is upon my life once again, and I am thankful for the words that I read; the words that came just at the perfect moment to bring me here; here where I’ve always been but never had the eyes to see. Here all along was my path, right under my feet, right in my heart.

I shall not stand before the divine and show nothing of my life; this precious gift. My path is and always was to help and uplift others, and I can only be thankful for the parallel to be shown, at the moment of 12, by the woman I’ve never met.

We are all truly just walking, simply walking; trying to find our way home. Find your lighthouse, find your parallel. Home is near.